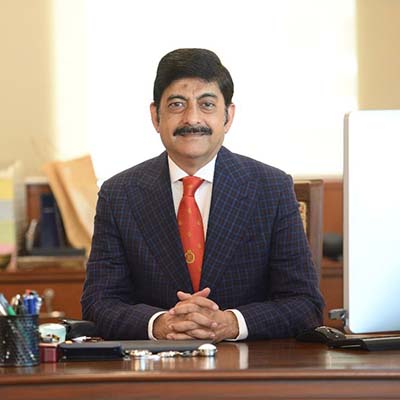 Mr. Sohail Shams the CEO -UMA is one of esteemed entrepreneurs in the country with an extensive experience and expertise gained over a span of 30 years in the shipping industry. United Marine agencies ranks among the principal shipping agencies, profoundly serving local and global trade partners. The founder of the company Mr. Shams-ul-Haq laid the basis of the firm which was strengthened by Mr. Sohail Shams’ devotion under his father’s mentorship. Mr. Sohail Shams is thoroughly professional with dynamic headship aptitude which reflects UMA’s success in the shipping and freight line of field. His expertise has contributed significantly in presenting innovation in services, tapping new markets avenues, upsurge of sales, and recurrent progress and growth for significant principals, to achieving constant progress for principals and patrons through collaborations with tactical coalitions. Due to his enduring services and trusted profile, he was credited as the Chairman of “All Pakistan Shipping Association” from 2004 to 2007 and the Chairman of FPCCI’s Standing Committee on “Foreign Sea Carrier Agents” in 2007. It is because of his able capabilities that UMA has triumphed its summit with such stature. His professionalism speaks volumes through provision of efficient services and has ensured the trusted distinction among trade bodies, stakeholders, and merchants both in local and international markets. His company enjoys the esteemed privilege of handling the largest vessel at Pakistani port – the Hyundai Takoma carrying a load of 5,500 TEUs. His vision behind introducing novelty led the port establishments to commence the deep dredging for increased draft of Karachi Port channel, empowering the arrival of large vessels in Pakistan. In conjunction with all the shipping tasks, UMA had also been actively involved in bearing Pakistan on the global cruise-ship map, and had served as agent to the distinctive German cruise liner M/S Albatross to have arrived at the Karachi harbor in almost two decades. UMA provides competent and economical shipping, cargo, freight forwarding, distribution and warehousing, international transportation, container consolidation and project cargo handling and related marine services in Pakistan and beyond while representing some of the foremost lines from Korea, Germany, Thailand, and Chile at Pakistan ports. Under Mr. Sohail’s able guidance UMA, had been commended for its’ thriving performance by the Federation of Pakistan Chambers of Commerce and Industry (FPCCI), with ‘Export Trophy Award’ successively for five years. Mr. Sohail Shams had received the award from the President of Pakistan on behalf of his company and he accounts his management acumen for the FPCCI’s ‘Businessman of The Year Gold Medal’ awards from the year 2007-2010 and 2018-2019. Mr. Shams’ delightful personality credits the achievements to his team, contributing in managing operations swiftly. His organization offers great career uplifting opportunities for a continuous growth besides an empowering work environment. Mr. Sohail Shams is also a member of the Pakistan Ship’s Agents Association – the solitary registered trade association of the shipping agents which manage vessels at Pakistan’s ports. UMA is renowned in global shipping fraternity while enjoying memberships of Lloyds List and Containerization International. As a thorough professional he truly adheres to provide unsurpassed service to the clients and patrons, which is a value addition in this competitive time and age, making UMA a pioneer in establishing a message communication system access a 24-hour online tracking of containers and cargo in-passage to their destinations with their principal offices. Introduction of UMA’s innovative and client trusted solutions and services have earned the company the certification for its’ its operations by DNV under the ISO 9001-2000 benchmark. Alongside his service and professionalism, he is an avid golf enthusiast, he has been an enormous support in promotion of golf in Pakistan. UMA has been enthusiastically allied with the Pakistan Golf Association’s flagship tournament – “the CNS Open Golf Championship” – as chief sponsors for past eleven years. Organizing and sponsoring Asian Tour Golf Championship in 2018 reflects his interest in promotion of golf in Pakistan. The tournament was held at an international level with players participating from other countries and Pakistan as well. Apart from this, Mr. Sohail and his company, UMA are also actively involved with numerous CSR corporate social responsibility activities, charitable and social organizations resulting in collaborations with hospitals, orphanages, schools, sports, and environment conservation organization. Mr. Sohail’s affiliation socially responsible activities have led UMA procure Annual Environment Excellence Awards from 2010-2013 and 2015 by the National Forum for Environment and Health. Mr. Sohail has strong set of work ethics, determination and compassion towards work and people which have enabled UMA to reach its dynamic prominence in the shipping and cargo industry.